At Keeping Blue we don’t believe in ‘greenwash’, we aren’t parading ourselves as eco-warriors trying to solve the world’s energy problems overnight. We can see that the global approach to energy use needs to change, that is for certain. An imbalance in nature always corrects itself over time, we as humans have the ability to interfere with and to some extent control the smoothness and effectiveness of transition periods. The energy dilemma is no different, either we as humans collectively act to restore balance to global energy production and demand, or we carry on with ‘business as normal’ and endure an elongated period of suffering whilst being forced to adapt. That is the reality and also the privilege of being human, we have the ability (and responsibility) to decide which course we take.

On a practical level, steps have already been taken in line with this paradigm shift, and the UK is well on it’s way towards a low carbon future. However, there is much work to be done and time is of the essence. The urgency to act increases with each passing year, each new set of climate data, each increase in oil price.

Buildings in the UK are responsible for over 40% of total energy consumption, and thereby represent the single largest potential for energy saving. The government requires the UK to cut carbon emissions by 80% in 2050 (compared to 1990 levels), with an interim target of 34% by 2020. This early milestone is crucial in reaching the overall objective, meeting or surpassing this target will instil confidence that the 80% reduction can be achieved.

An estimated 80% of buildings in 2050 have already been built, thus sustainable retrofit and on-site generation are key to reaching the objectives. In terms of new buildings, the future has been brought forward for the construction industry.Targets are in place for domestic properties to be ‘zero carbon’ by 2016 and for commercial buildings by 2019.

This certainly outlines an exciting picture of change and innovation, with technologies emerging almost daily to enable these goals to become a reality.

The implementation of these targets is outworked through a combination of legislation and incentives. For those looking to improve their properties and generate their own energy from renewable sources, there are numerous funding schemes, grants and incentives available. We offer services to assist in finding the best option for your individual property.
We can work alongside forward-thinking businesses to develop Energy Action Plans and produce Feasibility Studies for low carbon or renewable technologies. Our comprehensive Energy Audits will pinpoint the low-hanging fruit and direct you towards the optimal ROI measures applicable to your building.
The core of our work is consulting to the construction industry, where building regulations relating to energy efficiency have made it increasingly difficult to obtain planning permission. We have a proven track record of producing Part L compliance reports which meet and exceed requirements, as well as offering multi-faceted Low Carbon Design Advice – including specifying HVAC systems and passive design features.
Keeping Blue Ltd is ideally located in Horsham, West Sussex; 15 mins from Gatwick and less than an hour from central London. We offer Commercial and Residential services to homes and businesses throughout Sussex, and New Build services UK wide.

Director of Keeping Blue Ltd and principal consulting engineer, Chris Collier is passionate about producing innovative solutions to challenging engineering problems. With a focus on sustainability and energy efficiency, Chris is a member of the Institution of Engineering and Technology (MIET), working towards becoming a Chartered Engineer.

Prior to this Chris was employed as a Sustainability Consultant, and later as Technical Team Leader for a Low Carbon Consultancy based in London. There he was able to gather the skills and knowledge necessary to become an independent adviser, and quickly established himself as a competent engineer.

Chris also excelled whilst at university, graduating with 1st-Class Honours and being placed second overall in his engineering class. For his final year thesis, Chris developed a passive solar tracking device which he was invited to present to industry experts. Chris also gained valuable engineering experience on two in-depth optimisation projects on diamond mines in South Africa, whilst still a student. 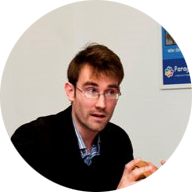 “Blue represents many things to our planet, in essence our planet is merely a blue dot floating in space. However this dot will remain our home for years to come, and we have a responsibility to steward that which we have been given with due care. The sky and the seas, which give our planet this perceived colour, are the sources of wind and wave energy which are being harnessed in increasingly clever and efficient ways. Scientists are currently developing a way of capturing the blue wavelength of light from the sun to improve the efficiency of solar panels from 34% up to 44%.

Whilst going ‘green’ may prove to be a passing trend, Keeping Blue represents a broader, lasting view towards a sustainable future. The magnitude of the task at hand has been compared to the scale of the Industrial Revolution. The time to take action has arrived!”

For more information about our services please get in touch.